Busy and exciting. That’s how I would describe this weekend. This weekend began the winter retreat season here at barakel with two retreats: College and Career on the East Side of camp, and Father and Son on the West Side. My work was mainly with the Father and Son group.

Campers on both sides of the lake started showing up friday evening, all excited and ready for the weekend. I got to run the Thunder Express with Lee Brown in the dark for the campers who were brave enough to slide down the ominously black tunnel. Mostly it was the fathers and sons but a few of the college and career people came over. Seeing little guys going down the dark hill with their dads was pretty entertaining. Everybody absolutely loved it, and since we had a little snow on the ground they really shot out at the end of the tunnel. 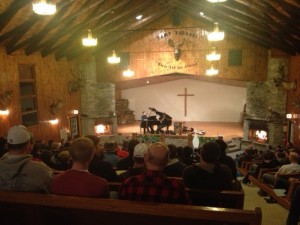 The retreats kick-off with the first evening chapel session. Tom Harmon was speaking to the Fathers and Sons, and on the East side Doug Rutledge spoke to the College and Career group. I went over and sat in the East side chapel and listened in on Doug. He preached on the will of God and doing what’s right. His basic point that I remembered was that no matter how lowly the job, God can use you. It was good solid stuff and he was an entertaining speaker as a bonus.

After evening chapel I didn’t have anything scheduled so I was able to go down to the ice rink and watch people play hockey. There were also lots of former summer staff that I knew from the past two summers that I was able to see and visit with.

While the darkness was still thick, Reuben and I went down to the lake the following morning to auger some holes in the ice with Lee Brown. This time it wasn’t just a practice run. After drilling Thirty-one holes in the ice both Reuben and I had the hang of drilling holes with the power auger down. I absolutely loved being out on the lake and seeing the dark skies turn light while thick snowflakes fell.

The rest of the day was spent helping with human ice bowling, broom ball, “egg zipping” in the west side chapel, and flag football. I even got to join in on a couple games of broom ball for a team that was short a player. I knew the guys on my team already and we had a blast. They won both games and went on to win the finals with the help of my younger-bigger brother, Taylor, who filled in for me.

The rest of the Chapel sessions during the week were a little different from the first one. The first chapel Tom Harmon spoke to the whole group of Fathers and Sons, but for Saturday’s and Sunday’s chapel some of the younger boys left midway through the chapel to go to a chapel service geared towards them. Chris was the speaker and did an absolutely fantastic job of keeping the attention of the kids and teaching them biblical truths. I was there for “crowd control” but Chris was great with them and I didn’t have much crowd controlling to do. The little guys really seemed to enjoy it a lot and learned well.

Sunday afternoon after all the campers had left, a couple of my good friends from this summer, Dan Knox and Zach Waltz stayed the afternoon and went and had Mio Pizza with Reuben and I. The pizza was excellent as always and the fellowship with the guys was great.

All in all it was a great, exciting week and a good beginningg to the winter retreat season. Today I’m taking it easy and doing a bit of reading for my coming test on Astronomy. I thank you all for your prayers and support, you have been a blessing and an encouragement. Continue to pray for the ministry here that we would be used by God for His glory.

Both of my trailer-mates and fellow seasonal staff guys have blogs which they update regularly. Check out Reuben at lausdeoatcamp.blogspot.com and Cody at excitingcody.blogspot.com

One thought on “First Retreats and Loads of Fun”